Hope everyone’s staying cool during this crazy heat wave were having. Just wanted to give you update on progress of the film.

Film campaign ended on indiegogo couple weeks ago. Big shout out everyone that donated towards the film. Unfortunately we didn’t meet our goal and are exploring other ways to get funding for the film. Still pushing forward though.

In September we be having casting call in Washington DC area for the film. There’s a lot talent actors in DC/ DMV area and we’re really excited about it. Will post details soon and if your interested in audition for role or would like to join crew email us at Beneathdasurface4@gmail.com

In meanwhile we still have Black Fist shirts available. Get yours today before they run out. Thanks again for the support.

9 days left! Where did time go! There’s still time left to donate to our film. We just got cool perks in. Posters and T-shirts which will post later. But if you need know why you should donate check out this video from Actor Producer Nelson Gadson. Thank you for your continued support!

Do you support Black film and Art? Want see a movie that’s funny, sexy but talks about real issues too. Support our film! 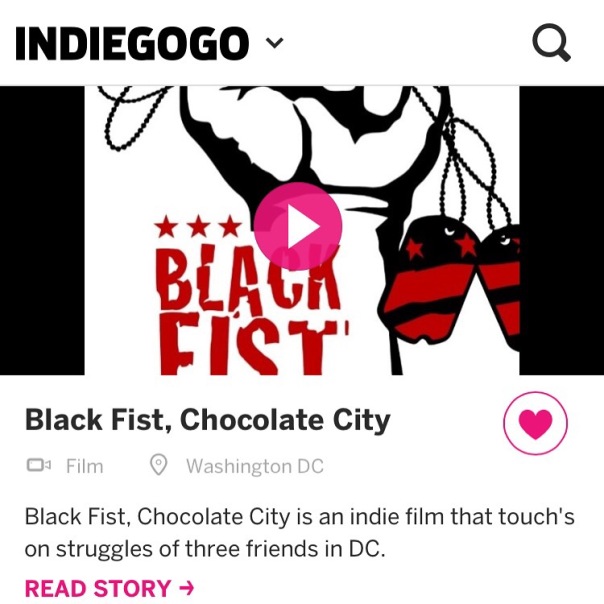 Funders get awesome perks for contributing. You can donate as little as a $1 We need $10,000 to make it happen. Help us meet our goal before it ends on July 25. Visit campaign

Thanks for your support!
Seven Williams

Tommorow join us for #Supportindiefilm 12-2pm est on Twitter. 27 days left so please help promote campaign. You can tweet our hashtag #fistup with #supportindiefilm and this link http://igg.me/at/blackfistcc/x/10330741 Thanks for your support!

Hey what’s going on many people asked well what Black Fist, Chocolate City about? Here’s a quick synopsis of the film. Still time to donate check link below.

Greg is back. After bravely serving four tours of duty in Afghanstian and Iraq, Greg — a decorated Marine — has returned home to his native Washington D.C. to begin the next chapter of his life. As Greg walks along the streets of our nation’s capital, he can’t believe how much everything has changed. His old neighborhood has been gentrified and he doesn’t like it. Rich elitists have invaded Chocolate City. When Greg reunites with his old friends, they discuss the issues affecting the city and what they can do about it. Each raises a Black Fist in solidarity. They vow to take action. But before they can do something about it, Greg is almost sideline by a beautiful yoga instructor. Sparks fly and tempers flare. Will Greg be able to complete his next mission or will his drive be compromised by intense attraction? https://www.indiegogo.com/projects/black-fist-chocolate-city–2/x/10330741#/story

Just wanted to take time to say thank you to all people who have donated or who have shared our campaign with thier family and friends. We realize during these tough times everyone is not able to donate. So we do appreciate those of you have spread the word via social media.

Please continue to help us get the word out about the film. There still time to donate as well https://t.co/n1OJveTruj

Hope everyone had great week!

Our Campaign is now up. It’s really important to reach our goal and make this film. We are doing a film about forgotten community in DC and our family touch on cureent issues. With a donation as little as a $1  you can help us. If you can’t donate maybe you can pass word on to one of your friends or post on social media.  use Hashtag #fist #bfcc #blackfistchocolatecity

It has been quite awhile since I wrote any updates for short film Black Fist, Chocolate City. Spent last couple months writing and traveling. Now we’re ready to start Crowdfunding/ Preproduction stages.

In the process of setting up Crowdfunding campaign to help finance the film. We put together a short video of quick synopsis of the film. We feel it’s important film that’s funny but also deals with real issues in community. We have all sort of perks to donators from tickets to private screening to T-shirts etc.

I know everyone’s been asking and excited bout the film. We have enormous support from people especially in Washington, D.C where the film takes place. We wanted to take our time to make the very best Short film. We put together great cast and crew that we feel will make this indie project a hit. We go into some the roughest areas of DC to begin production this spring.